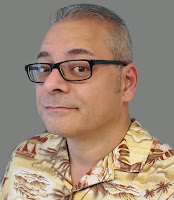 The M.U.S.C.L.E. Preservation Society was founded and is still ran by myself, Darrin M. Vindiola Sr. It started out as a simple fan site called 'Darrin's M.U.S.C.L.E. Page' in the fall of 1996, and then took on the official moniker of 'The M.P.S.' in the middle of 1997. We are accredited with being the internet's very first M.U.S.C.L.E. web page.
It all started out in a toy collecting newsgroup back in the fall of 1996. I saw a post with a subject heading that read.. "M.U.S.C.L.E. Anyone?" I quickly read it, and soon started corresponding with a nice guy from the U.K. named Tim Drage. We were both amazed at how many people remembered M.U.S.C.L.E. but after spending months scouring the Internet, we couldn't find a single web site dedicated to them. I threatened to put a change to that, and Tim encouraged me to do so. I had no scanner or digital camera at my disposal, so from across the pond, Tim supplied me with scans and images of M.U.S.C.L.E. figures to get me started. I then used AOL's homepage builder to construct the internet's very first M.U.S.C.L.E. site. Tim was with me in the very beginning and if it weren't for him, it's quite possible that The M.P.S. may have never been formed. 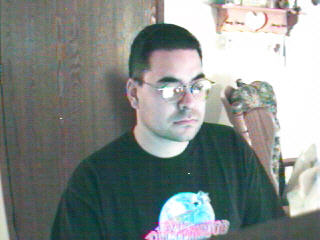 Me back in 1997, working on 'The M.U.S.C.L.E. Times'
the old M.P.S. print newsletter.
The M.P.S. was a hub for collectors to meet, chat, trade, buy, and sell M.U.S.C.L.E. Soon I had M.U.S.C.L.E. fans from all over the world e-mailing me from Australia, Canada, The U.K., New Zealand, Germany, France, Japan, and China! It was quite the phenomenon, and I was ecstatic to be right in the middle of it. Soon we started offering memberships to our society for the cost of $10.00 a year. A year’s membership got you a membership card, certificate, access to members only web pages, and a subscription to The M.U.S.C.L.E. Times newsletter. 'The M.U.S.C.L.E. Times' featured articles, stories, memories, comics and more.

The very first official M.P.S. website banner
One of our main goals we started pursuing in 1998, was to try and get the toy line re-released. We started an online petition to Mattel that fell on deaf ears even after several well thought out attempts of presenting it to them. In 2002 M.U.S.C.L.E. Heads got their wish sort of. The toy line and Manga  "Kinnikuman" from which M.U.S.C.L.E. originated from, arrived to the states in the form of a cartoon series, and the merchandising wave followed. The dubbed series was called 'Ultimate MUSCLE' and while it wasn't exactly the same as the old days, the newest generation of  M.U.S.C.L.E. toys were pretty cool, and it inevitably brought more exposure to our hobby.
During the last decade, The M.U.S.C.L.E. Preservation Society fell by the wayside and succinctly into internet oblivion. There were plenty of web-sites ran by old school collectors who were much more adept than I ever was with web design and content creation. So while I stepped away, I knew the hobby was in very competent hands. That being said, I always did feel bad about abandoning my baby so to speak.
Fast forward to late 2020 when it suddenly struck me that 2021 would mark 25 years since I had founded The M.P.S.! I decided that for posterity sake, I would relaunch The M.P.S. with as much original content and graphics I could find from The M.P.S. Archives.
A lot of collectors affectionately refer to me as the Father of the M.U.S.C.L.E. hobby, but I don't believe that. There were a lot of hard-core collectors with me in the very beginning that put in endless hours of cataloging and research, and all of them were more than happy to share the wealth of knowledge they acquired along the way. M.U.S.C.L.E. is a great toy line, and it only would have been a matter of time before someone started up an organization or club dedicated to them. I guess it does feel good knowing that I had a hand in all of this, and I can only hope that the hobby will continue to thrive for years to come.