There were 233 M.U.S.C.L.E. pictured on the M.U.S.C.L.E. poster made by Mattel, and through the course of collecting over the years, we've verified without a doubt that three more figures sculpts exist that were not featured on the poster.

There have been many figures over the years identical to American M.U.S.C.L.E., that collectors have claimed finding in packaging at one time or another. However, without being able to verify this by finding them in unopened packaging today, we can't get behind the stories and memories that collectors have shared, even though we so badly want to. 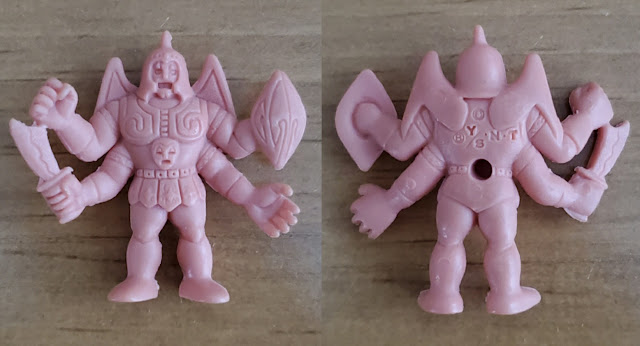 Here's a guy that has puzzled many. He's definitely a legitimate M.U.S.C.L.E. and has been found in unopened American packaging. This particular figure has a hole in the middle of its back. It is the only M.U.S.C.L.E. in the entire toy line that has a hole of this type. This M.U.S.C.L.E. is featured in many of the Kinnikuman comics and cartoons from Japan. His name is Satan Cross. For quite awhile many collectors thought his name was 'Saturn Cross', but we found that this mistake was made due to a translation error. 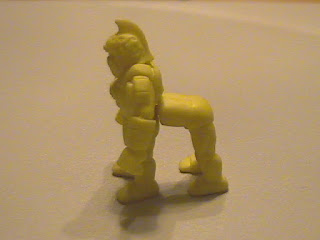 The figure you see to the left is actually two wrestlers! In the Japanese comics, he has a body behind him that is attached to his lower back. It's actually another person that sticks his head through this wrestlers midsection. (which is why Satan Cross has a face on his stomach, and two extra arms) Together they form a very strong 4 armed,4 legged wrestler, and fight as one. In the comic, when he detaches himself from the wrestler above, he is a full person that stands erect, and they fight as a team.

There have never been any reports of an attachment made for the American figure, although many Satan Cross Kinnikuman figures from Japan do come with these type of attachments. This has always been one of the more sought after figures due to it seeming a bit more rare than others in the toy line. The lore and speculation about the Satan Cross M.U.S.C.L.E. drove up prices for the figure early on during the M.U.S.C.L.E. collector renaissance of the 90s. 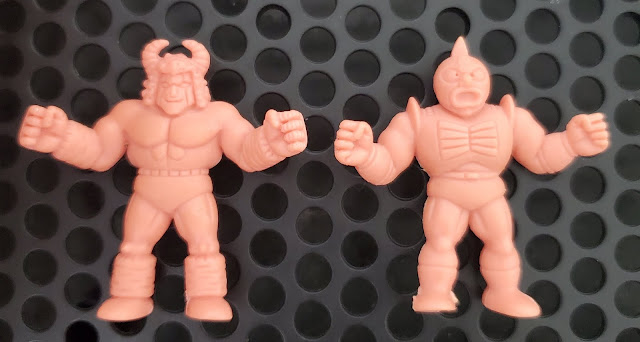 These are the two M.U.S.C.L.E's that came with the Hard Knockin' Rockin' Wrestling Ring. While the Terri-Bull figure to the left is not pictured on the mail-away poster, a LARGER version of the M.U.S.C.L.E Man figure on the right is. His larger cousin is #141 and is indeed present on that poster.