Variants and rarer pieces. It seems as if every toy line has their fair share of them. Here are some variations, as well as harder to find (if not near impossible) M.U.S.C.L.E. items, some of which are considered to be Holy Grails of M.U.S.C.L.E. collecting by many. 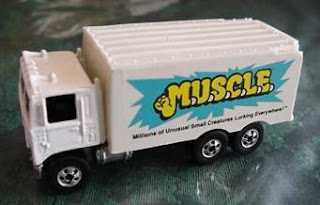 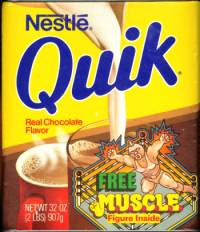 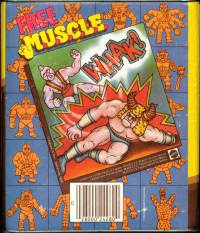 This is a 1986 Nestle' Quik tin featuring a M.U.S.C.L.E. cross promotion. Contrary to popular belief back in the day, this promotion did not feature an exclusive or limited edition M.U.S.C.L.E. figure. Below is the figure that came in this particular tin.

The promotion wasn't limited to just one sculpt.  Rather, you could have gotten any of the 233 M.U.S.C.L.E.'s made by Mattel. 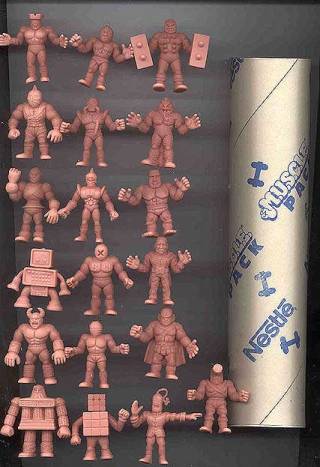 Nestle' and MATTEL's cross marketing promotion apparently didn't end with the M.U.S.C.L.E. QUIK can. Here is yet another promo from Nestle'. I got this scan from Marie M. Soulet back around 1998 and shared that she received this promo tube filled with M.U.S.C.L.E. figures at a school in Rio Piedras Puerto Rico back in the 80s.
She stated that Nestle' reps came to the school and were giving away these promotional tubes that contained M.U.S.C.L.E. figures. Since that time, I believe other stories have come out of Puerto Rico of folks who also remembered getting these tubes. To my knowledge, no such stories have been told of these tubes being given out in the states as of yet. A big thanks to Marie for reaching out to us, as well as the great scan!

So as you can see, the front of the variation box shows a close up picture of the belt rather than the traditional plastic window, revealing the belt inside of the box. The variation was most likely made as a means to cut costs, as cardboard was more likely cheaper than the plastic used for the viewing window.

This is a store shelf tag from 1985. These were hung on the upper shelves and pressed into the price rails that usually display price tags for products. As of January 2021, I have yet to meet another collector that has one of these in their collection. If you happen to own one, please let me know! 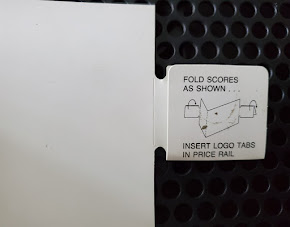 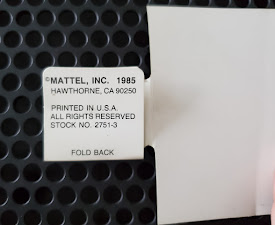 They were mounted on shelves in the toy aisles to grab the attention of passers by.  Both sides of the tag have the same picture on it, so people walking from either direction could see it. One of the insides of the tabs displays the MATTEL copyright and address, while the other shows directions on how to mount the display piece.