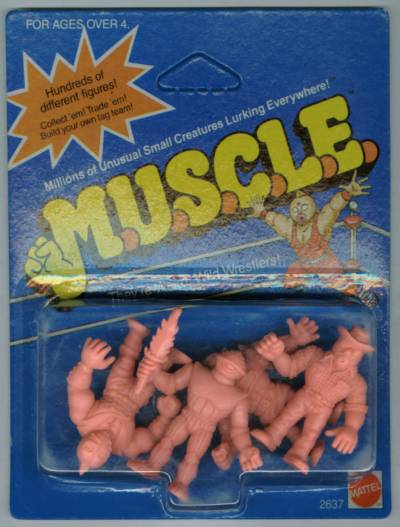 As a kid, this is probably the assortment of M.U.S.C.L.E. I purchased the most. Depending on where you bought them, these four packs would cost you anywhere from 99¢ to $2.00.

I loved these packs because they were the only assortment that you could see every figure you were getting. The earliest four packs had four flesh colored figures inside. Later on when interest in the toy line was diminishing, Mattel started releasing multi-colored 4-packs which had two colored, and two original flesh colored figures. 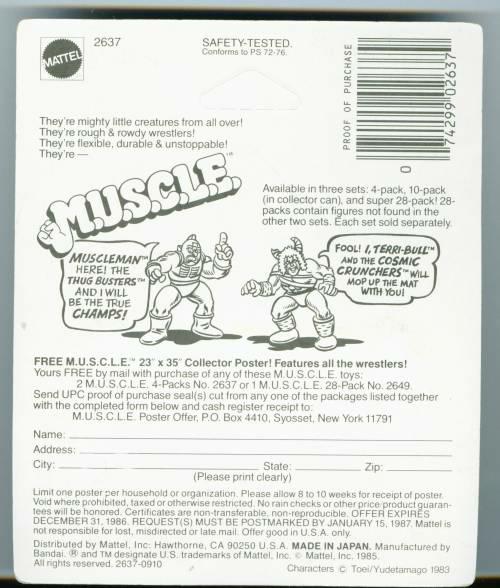 The original 4-packs had a mail away offer on the back for a M.U.S.C.L.E. Poster featuring all 233 M.U.S.C.L.E. figures in the toy line. All you had to do was send in two 4-Pack UPC proof of purchase seals, or one 28-Pack UPC.

There was a little gap on the bottom of the 4-pack bubble which made it easy to slide the figures out of, so it wasn't at all unusual to see 4 packs on the shelves that had less than four figures in them. It would take a little doing, but bending the card back the right way, could cause a figure to fall out without damaging the package. I came across many a pack that were missing figures. No doubt the result of some little hooligan pilfering the figures when no one was looking.